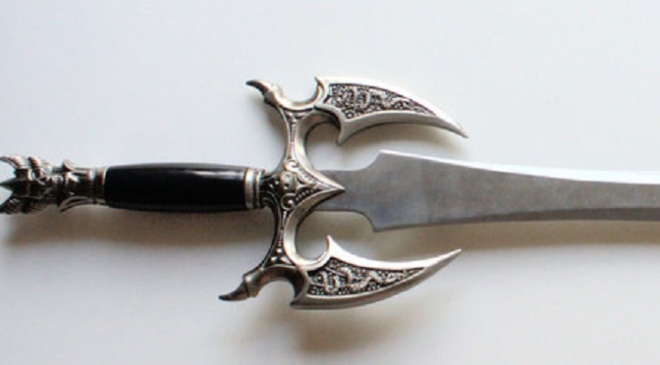 “The world is made for strong people, Sarah. You either impose your will on others, or you let them push you around for the rest of your life. You should know what I’m talking about. You have parents, don’t you?”

“And she probably tells you that she loves you very much,” said Baelan, his voice growing harder. “But whenever she gets a chance, she forces you to live by her laws. She rules over you. Wouldn’t you like a chance to do the same?”

“But my mom doesn’t use threats to tell me what to do. You did. You threatened an entire village with your army, just to get at Kay. When my mom lays down a rule, she’s trying to help me. You’re just trying to help yourself, and you don’t care who you need to push around to do it.”

The corners of Baelan’s mustache twitched. His face seemed to grow darker. “I’ve offered you power and glory, Sarah. Don’t be stupid enough to throw it away. I will master Castle Greystone, one way or another. It is my destiny to rule, and to conquer as many new worlds as I can find. If you tell me where Kay hid his spellbook, I will give you entire countries as your playthings. If you refuse me again, I will throw you in my dungeon and make sure you never see the light of day until you’re too old and gray to even remember your precious home and your beloved mother. Now tell me…where is the spellbook?”

Known as the Warlord of Greystone Valley, Baelan is a cunning middle-aged man who seeks a life filled with conflict and conquest. Unfortunately for him, the magical confines of Greystone Valley prevent him from achieving that goal.

Baelan was born under the sign of a shooting star, and the soothsayers proclaimed that this omen foretold great things for him. He was the only son of the Warlord Char and grew up with a sword in his hand. The right to rule in Baelan’s native land belonged to whoever was strong enough to take it, and from the day he took his first steps Baelan trained himself to be the strongest one there is.

When Baelan was sixteen years old, his father fell ill. Some suspected that he had been poisoned, but nobody knew the truth. He died within a matter of days, and Baelan claimed the old man’s armies as his own. Many were hesitant to allow a young boy to run an entire army, so Baelan knew that he needed to impress other power-hungry warriors as quickly as possible. He did this by leading a raid on the lair of the great fire-breathing dragon Ezzrir. In a pitched battle that nearly cost him his life, Baelan slew the dragon. From Ezzrir’s hoard he claimed the magical sword Uthyr, which has forevermore stood as a sign of his right to rule.

For more than twenty years Baelan ruled his homeland with an iron fist. The world was full of vast wilderness and populated largely by monsters and barbarians, making it the perfect land for an ambitious warlord. Battle after bloody battle, Baelan carved out a kingdom for himself. Unfortunately for him, he never got to finish his job.

One day, Baelan woke up to find himself in another world. Like so many before him, he had been called by the mystic power of Greystone Valley and could not leave. His kingdom that had stretched as far as the eye could see was gone, replaced by a small valley with no ruler – a valley that felt more like a prison to him.

But Baelan was not about to give up his life of conquest. He heard of a wizard named Argal who possessed a book with every spell known to humanity inside its covers. That spellbook, so they claimed, could even open up the doors to Castle Greystone, which from there would grant access to every world imaginable. Baelan’s frustration quickly turned to even greater ambition. Rather than conquer one world, he could conquer many. It was merely a matter of getting the spellbook. From there, he could raise an army of wizards and dragons mighty enough to charge into any other world and bring it to his knees. The ruler of a kingdom would become the ruler of worlds.

Using his natural charisma and the wealth he had accumulated in a few raids, Baelan was able to lead an assault on Argal’s tower. Unfortunately, the wizard did something Baelan did not expect – he gave the spellbook to his young ward Kay. The move caught the warlord by surprise, since he didn’t think anybody would trust a mere child to protect something so important. However, it has been almost a full year since then and Kay has still managed to elude Baelan’s forces. Still, Greystone Valley is a small place, and one child can’t keep escaping forever…