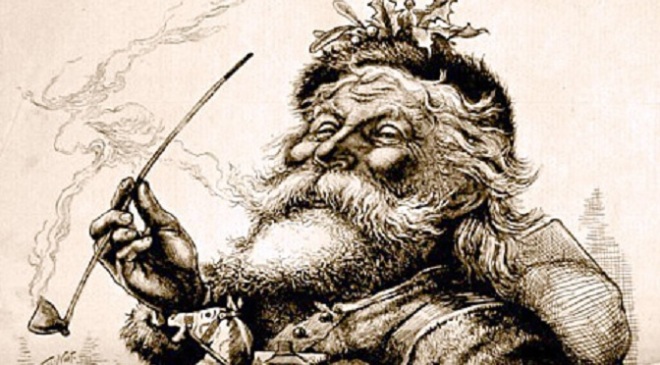 Greystone Valley is home to many different holiday celebrations, but few capture the imagination as completely as Christmas does. It is said that the mysterious wizard who created the valley was friends with Saint Nicholas, and it is through the wizard’s magic that many Christmas miracles are performed.

Greystone Valley is usually quite pleasant in terms of weather, as it is shielded from most storms by the large impassable mountains that protect it. The months are usually temperate except in the peaks of those great gray mountains, where snow falls year round. Despite this, December and January tend to be very snowy even in the southern parts of the valley. Snow usually falls early in December, and by Christmas almost every part of the valley is buried under a comfortable blanket of white flakes. December snow is usually light and fluffy, ideal for making snowmen and sledding down hills. In January, the weather turns colder and the winds get bitter, forcing people inside so they can huddle up next to fires and warm stoves.

The Legend of Saint Nicholas

Saint Nicholas was a man known not only for his great generosity but also for his extreme modesty. He was able to heal the sick and, according to some stories, even raise the dead, but he never took credit for his deeds.

Nicholas lived in an age when women had to offer a dowry to a man’s family before they married. The dowry was usually a sum of money, some animals from a farm, or a piece of land that the bride’s family owned. One old farmer had three daughters who each loved a different man, but he was too poor to offer any dowry. As a result, according to tradition, the daughters would not be allowed to marry the men they loved. Nicholas, having heard of this situation, entered the farmhouse during the night with three large purses filled with gold and left one for each daughter. In the morning, when the daughters awoke, they each found a purse of gold that could serve as a dowry. Because of Saint Nicholas, the daughters were able to marry the men they loved. This act is one of the foundations of gift-giving at Christmas time.

Saint Nicholas and the Wizard of Greystone Valley

The generosity of Saint Nicholas eventually drew the attention of the man known in history only as the Wizard of Greystone Valley. The Wizard became friends with Nicholas and offered him a chance to live in the world between worlds, but Nicholas wished to remain on Earth doing good deeds. In recognition of their friendship, the Wizard gave Nicholas many magical gifts. These gifts included long life, divining magic that allowed him to see people anywhere in the world, and the magic needed to make creatures fly.

The most significant gift the Wizard gave Nicholas is access to the legendary Castle Greystone itself. Sealed to all except the Wizard, Nicholas is able to enter the castle one day out of every year. Through the castle, he has access to every world that touches Greystone Valley, as well as the ability to manipulate time itself. As a result, Nicholas is able to ride his sleigh through many different lands and deliver gifts on Christmas Eve in only a single night.

Nicholas is known by many names in many different lands, including Santa Claus, Father Christmas, and Kris Kringle. To most people in Greystone Valley, he is known simply as Saint Nicholas. His generosity even before he met the Wizard is legendary, and many residents of the valley mark Christmas Day as a time to show that spirit of love and kindness to one another.